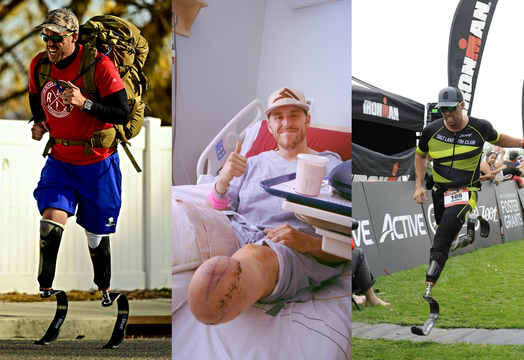 Start Your Own Campaign for Amputee Blade Runners

Throughout most of my life I never had the ability to run well and at times at all due to a disease I was born with that affected my feet that progressed till I the age of 32. On Nov 4th, 2015 I became a double amputee.   I made it a goal in the hospital that I was going to run and work my way to a marathon and even an Ironman.  Months later I purchased walking legs and began training.  After doing some 5Ks and short triathlons, I found that I couldn’t do much running with my walking legs.  I so badly needed running blades.   Not only do blades help amputees run faster and smoother but they also help with pain.  The impact of running can be intense, especially at long distances; the running blades also act as suspension give some relief on the limbs and the joints throughout my body.

Unfortunately my insurance would not cover any running blade as they told me that it is considered a “luxury.”  Sadly, this made my goal seem nearly impossible.

Luckily for me I was able to connect with Amputee Blade Runners, an organization that was willing to make me a set of running blades for free.  Yes, I mean FREE! In September, 2016 I traveled to Nashville, TN where I was able to purely run for first time in my life on a pair of Fillauer running blades.  Later that day I went to the hotel cried for hours in thanks for gift and ability that I received.

Since I’ve had my legs, I run all the time; I’ve competed in races such as Ruck Runs, Ragnar, 10Ks, ½ Marathons, 4 Olympic Distance Triathlons, and 2 Ironman 70.3s. I love to run. This year my main goal is to do my first Marathon.  The kindness of Amputee Blade Runners in giving me a pair of running legs and accepting me as one of their Ambassadors has changed my life!

I want to have someone else have the same happiness that received so that they may achieve their goals and inspire others.  Amputee Blade Runners couldn’t provide me my running blades without the help of partners, sponsors and donations.

For my marathon race in June I want to raise $3,000 to help cover the cost of someone to receive 1 running leg!  Please help me #LendaLeg