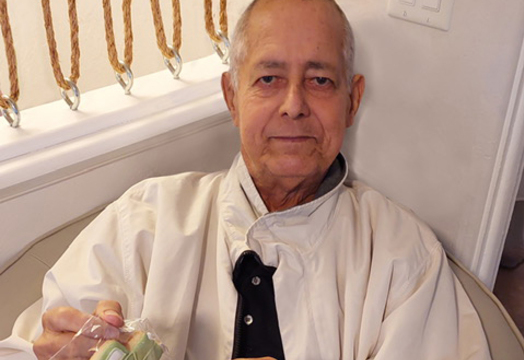 Start Your Own Campaign for Nathaniel's Hope

Mario, (Tito), was born in Cayey, Puerto Rico November 21, 1947, to José Gómez Torres and Maria Carrasquillo Vergara. He graduated in 1966 from Casa Manresa Catholic Seminary in Aibonito, Puerto Rico. He continued his education at the University of Puerto Rico in Rio Piedras, graduating with a Bachelor of Science Degree in Business Administration. In 1966 Mario met Carmen M. Abreu- Rolón. They married October 28, 1966, in Caguas, Puerto Rico.

After graduation, he was employed as a salesman at Ultra Clothing Stores. He continued to excel in business, becoming the General Manager at Caguas Expressway Motors in Caguas, Puerto Rico. He opened MG Auto Export in College Park, FL and Las Americas Motors in Cayey, Puerto Rico. With his successful entrepreneurial ability, he opened two additional locations in Puerto Rico. He retired in 1997 and enjoyed traveling throughout Puerto Rico, The United States and Argentina.

Mario’s love of and passion for automobiles, particularly Jeeps and Mercedes Benz, became his lifelong hobby.  He loved a party, and often entertained large friend and family groups, amazing them with his delicious cooking. His sense of fun and love of people endeared him to many friends and family alike.

Mario is survived by his loving wife of 56 years, Carmen Abreu Rolón; his sister, Maria Ileana Gómez-Carrasquillo of Puerto Rico; and his children Carmencita Gee, Mario Jr, Chily, and Delis Gómez-Abreu, all of Orlando, FL. He adored his grandchildren and the home would be filled with sounds of laughter as he played with them. He will be sadly missed by Raúl Gee Gómez (20), twins Fabian Nicola Gómez and Adrian Nicola Gómez (12), and Diego Nicola Gómez (10).

Mario is predeceased by his parents, Jose Gómez Torres and Maria Carrasquillo Vergara; his brothers Jesus and José Luis, and one sister, Carmen Lydia.