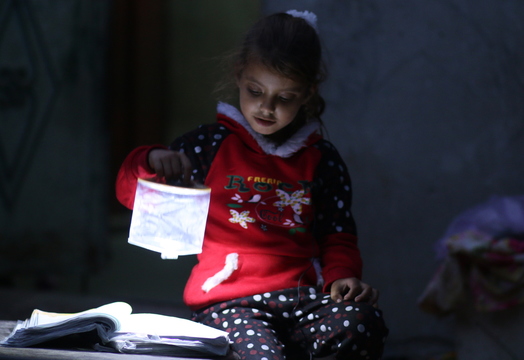 Start Your Own Campaign for Rebuilding Alliance

750,000 Children in Gaza live in darkness because electricity is out 20 hours a day. Let’s light up their nights!

The sole power plant in Gaza has shut down. Electricity is out 20 hours a day, making the simplest of tasks difficult. Become part of Light and Hope, a Santa Cruz alliance dedicated to sending Little Suns solar-powered llights to the children in Gaza, so they can study and play safely when the power is out.

It's Time for Light is a project of Rebuilding Alliance, a Bay Area non-profit dedicated to bringing the world together to rebuild war-torn communities. In partnership with Palestinian NGOs, Rebuilding Alliance distributes ingenious inflatable solar lanterns directly to families in need. As a bonus, a generous 2-for-1 matching grant from Little Sun Solar Lights doubles the number of lights sent! Working with them, we can empower Gaza's next generation, open the blockade, and bring hope to all.

Join our Santa Cruz campaign to purchase these solar lights to light up Palestinian homes and let them know we care. Individuals, businesses, and community groups can participate in this effort by purchasing four solar lights for $40 to send to Gaza. Or for $50, you'll send three lights to Gaza and receive one in solidarity.

Participants are invited to join Palestinian families by shining a solar light on Wednesday evenings and sharing your light images on social media using #ItsTimeForLight. In addition, we invite Santa Cruz community groups to shine their solar light at meetings as a gesture toward a sustainable peace!

Our goal is to send 1000 lights—500 Little Suns solar lights sponsored by our Santa Cruz community, which will be doubled to 1000!

At about 5000 years old, the Gaza strip, often referred to as Gaza City, is one of the oldest cities in the world. During that time, it has been both a thriving port and—as it is often referred to today—the world’s largest outdoor prison: Palestinian, Israeli and foreign staff of human rights organizations are not permitted to enter or leave Gaza except on very rare occasion.

Gaza is one of the most densely populated areas on the planet. Currently, about 1.8 million people call Gaza home, living in an area that is about 25 miles long and three to seven miles wide. Of the 1.8 million inhabitants of the Gaza strip, 1.1 million are refugees, with 75% of population under 25, and more than 40% of adults unemployed.

Daily life in Gaza is defined by deficit and desperation: Residents make do with four hours of electricity a day. Most people don't have access to clean water because the supply system is contaminated with sewage. Breakfast for some school children is a cup of hot water flavored with a dash of salt, hospitals lack supplies and services, life expectancy is 10 years less than in Israel, and access to fishing is extremely restricted. The UN has declared that Gaza may be uninhabitable by 2020 if conditions do not improve.

The crisis in Gaza is desperate. If you live in the US, please email Congress now to urge your Senators and Representative to intervene on your behalf  as their constituent, to prevent what will soon become starvation.